Bhaktapur Durbar Square is the plaza in front of the royal palace of the old Bhaktapur Kingdom, 1400m above sea level. It is a UNESCO World Heritage Site.

The Bhaktapur Durbar Square is located in the current town of Bhaktapur, also known as Bhadgaon, which lies 13 km east of Kathmandu. While the complex consists of at least four distinct squares (Durbar Square, Taumadhi Square, Dattatreya Square and Pottery Square), the whole area is informally known as the Bhakapur Durbar Square and is a highly visited site in the Kathmandu Valley.

The major attraction of this place are:

The Palace of Fifty-five Windows (Pachpanna Jhyale Durbar) was built during the reign of the Malla King Yaksha Malla in 1427 AD and was remodeled by King Bhupatindra Malla in the 17th century. Among the brick walls, with their gracious setting and sculptural design, is a balcony of fifty-five windows, considered to be a unique masterpiece of woodcarving.It is also known as one of the oldest monument present in nepal.

Batsala Temple was the stone temple of goddess Batsala Devi that included many intricate carvings; however, it was most famous for its bronze bell, known to local residents as "the bell-of barking dogs " as when it is rung, dogs in the vicinity bark and howl. The colossal bell was hung by King Ranjit Malla in 1737 AD and was used to sound the daily curfew. It was rung every morning when goddess Taleju was worshiped. The bell remains intact; the temple was completely demolished by the 2015 Gorkha earthquake.

The Statue of King Bhupatindra Malla in the act of worship can be seen on a column facing the palace. Of the square's many statues, this is considered to be the most magnificent.

Nyatapola in Newari language means five stories - the symbolic of five basic elements. This is the biggest and highest pagoda of Nepal ever built with such architectural perfection and artistic beauty.

The Bhairab Nath Temple is dedicated to Bhairava the most fierce and manifestation aspect of lord Shiva.

Lu Dhowka (The Golden Gate) is said to be the most beautiful and richly moulded specimen of its kind in the entire world. The door is surmounted by a figure of the Hindu goddess Kali and Garuda (mythical griffin) and attended by two heavenly nymphs. It is embellished with monsters and other Hindu mythical creatures of marvellous intricacy. Percy Brown, an eminent English art critic and historian, described the Golden Gate as "the most lovely piece of art in the whole Kingdom; it is placed like a jewel, flashing innumerable facets in the handsome setting of its surroundings." The gate was erected by King Ranjit Malla and is the entrance to the main courtyard of the palace of fifty-five windows.

The magnificent and beautiful gate was produced from artisans whose hands were cut off after finishing touch to them by the envious Bhadgoun king so that no more of such masterpiece would be produced again. It is a very beautiful gate which attracts every human creatures. 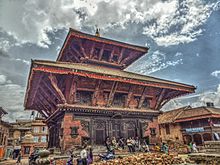 The holy god Shiva temple, the mini pashupati, is believed to be built right in front of the palace after a Bhadgoan king dreamed of it.